‘Tis the Season (for Fruits and Veggies!)

In a recent post (Home Grown Montana), I suggest considering seasonality when planning meals.  Neal’s response to my suggestion?

“The only foods that I know when they’re in season are watermelons in August–because there was a Watermelon Festival in Arkansas when I was growing up– and pumpkins around Halloween.”

While amusing, Neal’s response reminded me that it’s not easy to know when produce is in season.  Consumer demand continues to support transporting our food thousands of miles from warmer climates or growing veggies with the help of climate-controlled conditions.  So a vegetable such as zucchini, which I’ve only seen grow in Montana during the hot summer months, is still available here in grocery stores year-round.

One way to determine what’s in season is by using a seasonality chart.  Charts vary by region and are only approximations, dependent upon weather conditions and produce variety.  Here are two of my favorites:

The first is a chart that is specific to Montana, from the Community Food and Agriculture Coalition in Missoula.  It is also found at the bottom of this post.

And the second is a more inclusive, general chart.  It’s specific to California, but still makes sense for those of us living in Montana since we receive much of our grocery store produce from California.

In addition to the charts above, price and appearance can be indicative of when produce is in season. When farms and grocery stores have an abundance of certain fruits or vegetables, they are usually willing to sell at a lower price.  However, keep in mind that grocers will discount certain fruits and vegetables for other marketing purposes too, so prices aren’t necessarily an accurate indication.  When produce is in-season, it also usually looks better. Asparagus stalks in the spring (when asparagus is in season) are small and thin, bright green, and beautiful.  Asparagus stalks in December? Usually thick, tough and pale green in color.  Asparagus is an obvious one; but not all appearance differences are quite as dramatic.

Hopefully by taking a look at the charts above, as well as considering prices and appearance, you can get a better idea of what’s in-season.   Also don’t be afraid to ask the grocery store staff or farmers at the local farmers market – they’re usually happy to help.

It’s officially spring, and thus a great time to be excited about an abundance of frest fruits and veggies for your Montana Meals! 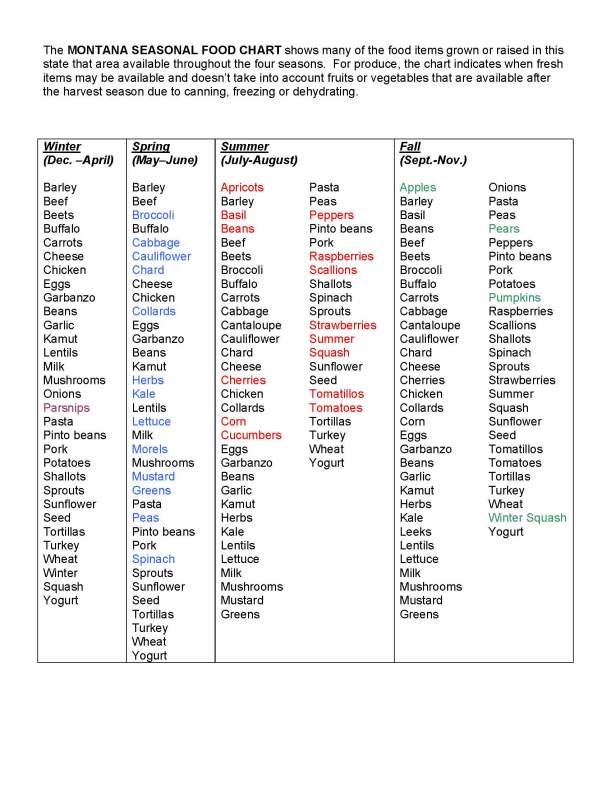 This site uses Akismet to reduce spam. Learn how your comment data is processed.

Find what you need!